Sorry but I don't have the time. I think I am gonna shut down the site. I may reopen it one day.

Yes I realize nobody is reading this.
Posted by mmyersisgod at 5:29 PM No comments: 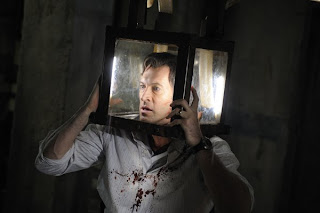 Forensics expert Hoffman goes on the hunt in order to protect the secret that he is the newest person to carry on Jigsaw's legacy.

A franchise that started as one tiny, indie horror film has turned into a million dollar Halloween tradition. While the films are highly lambasted by critics, and the casual viewer alike, Saw still brings in the bread. With each film Jigsaw's legacy was heightened, and his story was brought further. With each film the hate and love both increased. The first 4 films all had one thing in common, Darren Bousman. Now in Saw V there is no Bousman. This time David Hackl is sitting in the directors chair. While, he was not the directer before he did work on the other films with Bousman, so he should have no problem, right? You probably expected me to say wrong, but no Saw V was actually pretty good. While the last 4 have not really been good films technical wise, they have been fun and entertaining films for the season. In Saw V a few new characters are introduced, and more loose ends are tied up. Once again using an abundance of flashbacks Saw has further divulged into Jigsaw's story. This time the main characters are not Jigsaw or his previous apprentice Amanda, they are two "justice fighters". However one is Hoffman, the man who took over Jigsaw's job in 4. With the usual Saw twists thrown in, this was a pretty neat Saw film. A fun theater experienced. Not recommended to close minded viewers who already hate the first 4.
Posted by mmyersisgod at 12:08 PM No comments:

A gang of vicious young punks break into the house of an elderly couple, terrorize, and then murder them. Suddenly, the clocks in the house begin to run backwards, and the dead come back for revenge!

Here Fulci is at it again. This time he succeeds. HOUSE OF CLOCKS is not really a zombie film but Fulci still manages to throw them in. It starts out pretty tame but quickly descends into the madness we know Fulci for. A film with worthwhile acting, decent dubbing, and an ace writing team. It wasn't scary per say but it had a pretty creepy vibe to go along with it. There is a scene with a cat that makes me sick, but it does not go unpunished. Fulci's misogynistic ways show through once again, occasionally making the viewer uncomfortable. However the film can still be enjoyed. The average viewer would probably enjoy it, and the Fulci addict will love it. A film that showed Fulci still had it in him.
Posted by mmyersisgod at 11:50 AM No comments: 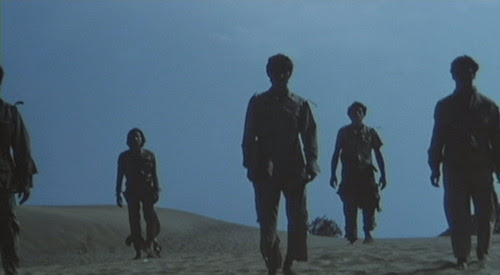 A film that can be compared to the likes of BURIAL GROUND: NIGHTS OF TERROR. So bad it is good. It had it's moments, but most of it was unintentional hilarity. There were scenes with obvious fake props(rather than actors), and fake sets that were only stills. The direction was mediocre, with the acting being horrid. The dubbing does not help it's case, and the dialogue is very awkward. Nothing really stands out about the zombies, besides the obvious fake zombie. The real sets were halfway decent. The basic plot is: During World War II, a small German squadron was assigned the task of carrying a shipment of Nazi gold across the African desert. Along the way, the squadron was ambushed by the Allies, and only one American soldier, Robert, survived. Years later, Robert tells his story to a German treasure hunter named Kurt, who promptly murders him. Robert's son, upon learning of his father's death, vows to travel to Africa and find the lost gold himself. While the desert is hazardous enough by itself, the dangers lurking around this oasis are more than any of the treasure hunters ever imagined. I would only recommend it for those who love their Italian cheese.
Posted by mmyersisgod at 6:29 PM No comments: 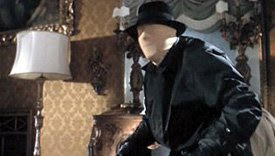 One of the first Giallos, from notorious Italian director Mario Bava. The famed director of Black Sunday, Black Sabbath, Bay Of Blood(A.K.A. Twitch of the Death Nerve) and The Girl Who Knew Too Much. The film revolves around a group of unscrupulous fashion models. We start to see how "innocent" the women really are. One by one they are killed off in creative ways. What follows is an hour and a half, of a complex, well developed story, all around superb acting, and a killer twist to remember. The camera work that Bava achieves is stunningly beautiful, and the different shots chosen work great for their purposes. Although, the killer's getup is not extremely complex, it is still one creepy and menacing costume, and a getup used quite often in later Giallos. The sub stories were very interesting even if occasionally they got in the way. The ending was in my opinion monumental, and very well thought out. I would give this film, 4 and a half stars.
Posted by mmyersisgod at 8:54 PM No comments: